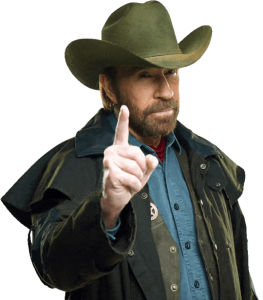 When I was growing up, Chuck Norris was the go-to martial arts guy to star in B-grade Hollywood films. He was the tough guy who always took down the bad guys and saved the day.

For a new generation, Chuck Norris has evolved into a meme. Online, you’ll find all manner of impossible ‘Facts about Chuck Norris’:

“When the Boogeyman goes to sleep every night, he checks his closet for Chuck Norris”

“Chuck Norris’ tears can cure cancer. Too bad he never cries. Ever.”

“Death once had a near-Chuck-Norris experience.”

You get the picture. Chuck Norris is one tough guy.

Offline, Norris talks it down. He wrote a column where he said: “I’ve got a bulletin for you, folks. I am no superman… I put too much trust in who I was, what I could do and what I acquired. I forgot how much I needed others and especially God. Whether we are famous or not, we all need God.”

He also said: “There was a man whose tears could cure cancer or any other disease, including the real cause of all diseases – sin. His blood did. His name was Jesus, not Chuck Norris. If your soul needs healing, the prescription you need is not Chuck Norris’ tears, it’s Jesus’ blood… even the toughest characters I have played could never measure up to the real power in this universe.”

Would you like to get to know the guy who even Chuck Norris recognises he needs and puts his faith in?

This is the Jesus we’re on about at St Mark’s and if you come along one Sunday, we’d love to introduce you to Him.